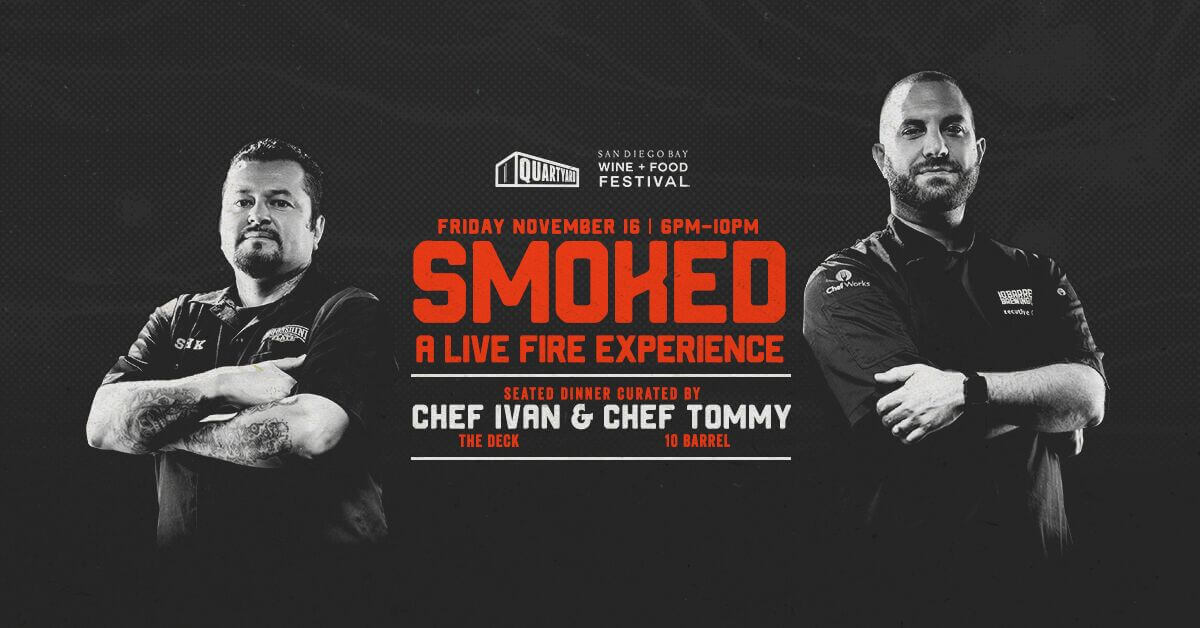 Chef Tommy Fraioli and Justin Navalle have been homies for almost twenty years. From the time they were teenagers, they’d always cooked for their friends and had barbecues. Both went on to manage venues: Tommy became Executive Chef at 10 Barrel Brewing, and Justin became Managing Partner of Quartyard.  So when the opportunity to produce an event with the San Diego Wine & Food Festival arose, the old friends knew that it had to be a backyard-style barbecue just like the kickbacks they hosted in times past, with the addition of Chef Ivan Munoz.

The collaboration will be SMOKED: A LIVE FIRE EXPERIENCE. Chef Tommy Fraioli and Ivan Munoz will curate a four-course family style BBQ dinner, in campfire fashion. Open flame cooking, meat smoking, beer and whiskey pairings will make the mouth-watering night a belly-pleaser. To complement the cuisine, guests will enjoy a bluegrass concert performance under the East Village stars.

In keeping with fine dining’s everchanging daily menu featuring seasonal bests, the top secret menu will remain under wraps and subject to change, in order to ensure that all ingredients are as fresh as possible. The chefs are focusing on techniques. One possibility is using an asado cross to roast a whole animal over open coals. “It’s gonna be hot, juicy meat in your mouth,” Tommy promises.

“Food and hospitality is everything to me,” Ivan says. “It’s brought me friends, family, and some of my best times and biggest challenges…It’s my life.”

Given that all have careers in hospitality, it’s the sense of sharing, feasting, and connecting over food in a casual, pleasant setting that is at the heart of SMOKED. In a more sit-down dining concept, Justin and Tommy will deliver the same spirit of hospitality that they have always enjoyed offering to their friends. “It’s appropriate that we’re having this event in November, not only because that’s the week of the festival,” Justin says, “but because we would always cook Thanksgiving meals for friends in town who couldn’t make it home to be with their family.”

“Tom and I are best friends,” Justin explains, “and we moved to San Diego with zero dollars. We would make dinners for our house full of roommates with a few dollars spent and a camping gas grill, because we didn’t have gas in the house at the time.  That was years ago. We both landed in East Village and that’s where we also met Ivan, pitmaster at The Deck in Moonshine Flats, he makes the bombest smoked barbecue in the city.”

“Justin and I have been friends for 18 years now,” Tommy says, “so whenever he has asked me to help cook at an event he’s putting on, I’m always down. I’m excited to collaborate with Ivan for the first time and help each other experiment with new techniques.”

“Tommy and I met in Folsom Prison,” Ivan jokes, “no actually, we have many mutual friends, both industry and personal. This will be our first collaboration, but it will definitely be the first of many, I’m sure. It’s a true honor to be invited to work at this great venue alongside another very talented chef, so I’m sure you will taste the passion and love in our food.”

The group is no stranger to San Diego Food & Wine Festival, a week celebrating local culinary talent. Tommy Fraioli has won “Chef of the Fest,” in 2012, and joined forces with Justin when curating SMOKED. Quartyard had been a venue for the Festival since it opened, and this year the urban park was approached again. But Quartyard’s new space—it moved a block down and reopened April 2018—has a smaller footprint, meaning the event called for a more intimate vibe and an upscale, unique experience. Knowing they wanted the best possible barbecue menu, they roped in Ivan Munoz. They knew they wanted a seated, multi-course dinner in an innovative urban space with a casual backyard vibe. Justin will be decking his venue out to have glowing lanterns and flickering candle-lit farm tables for soft-lit, rustic campground ambience. The band Bleu Deux will be jammin’ out the bluegrass to complete the folk vibe.

“My best memories growing up are my parents and neighbors opening their garages and everyone would cook and my dad would play music,” Justin reminisces, “and I wanted to recreate that feeling of comfort, family, community, and the delicious, memorable meals that remind you of home. The kind of cooking that brings you back to firing up the smoker or grill with your loved ones for a long night of beer, tunes, and laughs.”

SMOKED is a part of The San Diego Wine and Food Festival’s more than 40 events throughout the week that all culminate at the epic Grand Tasting, November 17, on the stunning Embarcadero Marina Park North.